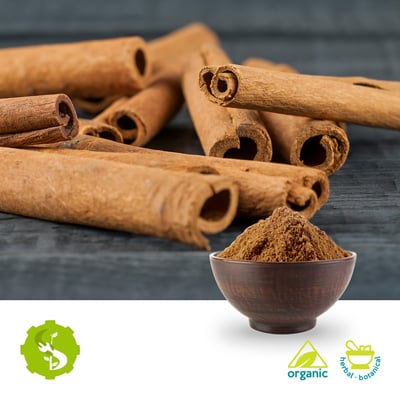 Cinnamon is a spice obtained from the inner bark of several tree species from the genus Cinnamomum. Cinnamon is used mainly as an aromatic condiment and flavouring additive in a wide variety of cuisines, sweet and savoury dishes, breakfast cereals, snackfoods, tea and traditional foods. The aroma and flavour of cinnamon derive from its essential oil and principal component, cinnamaldehyde, as well as numerous other constituents, including eugenol.

Cinnamon is used as a spice and aromatic.

Traditionally, the bark or oil has been used to combat microorganisms, diarrhea, and other GI disorders, and dysmenorrhea, although there is limited data to support these uses.

Cinnamon has found multiple activities including anti-inflammatory, antioxidant, and antimicrobial activity ,it also have potential applications in the management of diabetes.

In foods, cinnamon is used as a spice and as a flavoring agent in beverages.

In manufacturing, cinnamon oil is used in small amounts in toothpaste, mouthwashes, gargles, lotions, liniments, soaps, detergents, and other pharmaceutical products and cosmetics.