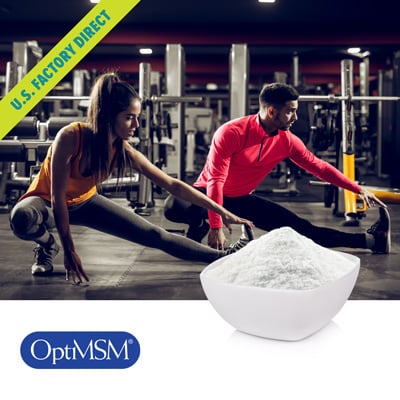 Copy the link below to share with others:
Copy to Clipboard
Visit Bergstrom Nutrition storefront
Excipients
This is a branded ingredient. The seller has provided you with additional information such as applications, clinical research, intellectual property, and more. Click “Learn More” to view details.
Ingredient Code: 30030
Learn More

Share Product
Branded Details
Overview
Application
Clinical Research
Newsroom
Product Overview & Benefits
Pricing and Value
Sales Sheet
Faqs
Why OptiMSM®? MSM (methylsulfonylmethane), also known as dimethyl sulfone (DMSO2) and methyl sulfone, is an organic sulfur-containing compound that is essential for optimal health. Without sufficient MSM sulfur, your body cannot maintain an appropriate level of homeostasis. OptiMSM® has earned the reputation for the purest, safest, and most consistent MSM in the world. OptiMSM® utilizes a proprietary multi-stage distillation process to ensure a 99.9% pure product, guaranteeing a consistent, high-quality form of MSM. It is the only GRAS-designated, Kosher and Halal certified, non-GMO, gluten-free, allergen-free, non-shellfish-derived, vegan MSM backed by extensive toxicology data.
Click here for an overview of OptiMSM®
Learn about how OptiMSM® can strengthen and protect hair, skin and nails.
Learn about how OptiMSM® can support joint health.
Learn about how OptiMSM® can reduce recovery time after a workout.
Learn about how OptiMSM® nourishes the skin from within.

Q. WHAT MAKES OPTIMSM® DIFFERENT FROM OTHER MSM AVAILABLE? IS IT MADE IN THE USA?
A. OptiMSM® is the purest and only GRAS-designated MSM (methylsulfonylmethane). Bergstrom Nutrition uses a proprietary multi-stage distillation process, and every batch is third-party tested, ensuring optimal purity, quality, and consistency. In contrast to OptiMSM®, other commercially-available MSM uses crystallization to isolate the MSM molecule. As this crystallized material cools, occlusions can develop that trap contaminants within the MSM and lead to material that may contain heavy metals, residual water, and other impurities.
OptiMSM® is made exclusively in the USA and manufactured in a single purpose cGMP-certiﬁed, ISO-registered facility to help provide essential transparency and traceability.
Kosher and Halal certiﬁed, non-GMO, gluten-free, allergen-free, non-shellﬁsh-derived, and vegan, our OptiMSM® is backed by extensive toxicology data.

Q. IS OPTIMSM® NATURAL? IS THERE A NATURAL SOURCE OF MSM?
A. MSM is a naturally occurring substance found in the human body and many foods. The highest concentration of MSM in nature is in mammal milk, but these sources contain MSM in parts per million. Therefore, you cannot extract, isolate or grow the compound. Commercially available MSM does not come from wood, plants or fossil fuels. You can’t squeeze MSM from a tree, extract it from plants or remove it from petroleum or other fossil fuels. A chemical reaction is required to make MSM. All commercially available MSM is synthetic and created through a chemical reaction of DMSO and hydrogen peroxide. Since all commercial MSM produced comes from DMSO, and all commercial DMSO is produced synthetically, the origin of the DMSO is insigniﬁcant.DMSO is produced using several starting materials: methanol and hydrogen sulﬁde, or methanol and carbon disulﬁde. Whichever starting materials used, chemical reactions are required to produce DMSO.

There is a misconception that one supply of MSM is more natural than another. All MSM produced for commercial use utilizes the same raw materials—but there is a difference, and that boils down to the puriﬁcation process, testing levels, speciﬁcations and quality of the manufacturing.Bergstrom Nutrition’s focus on purity sets OptiMSM® apart. Bergstrom Nutrition pioneered the distillation process of MSM ensuring the highest levels of purity and safety. Chemical engineers and other experts recognize the multi-stage distillation process used to purify OptiMSM® as the superior method on the market. The end product is biomimetic, which means the same as that found in nature.

Every batch of OptiMSM® is is distilled, ensuring optimal purity, quality, and consistency. In contrast to OptiMSM®, other commercially available MSM uses crystallization to isolate the MSM molecule.

At Bergstrom, we are driven to develop innovative uses for our products to benefit a variety of industries. Whether utilized as MSM, Methylsulfonylmethane or under other recognized names such as Dimethyl Sulfone, DMSO2, or Methyl Sulfone, we work to identify new, unique applications for multiple channels, including dietary supplements, personal care, food and beverage, agricultural and industrial.

Published Clinical Studies on the Efficacy of MSM Using OptiMSM®

Click here for a comprehensive listing of published studies on the efficacy of MSM.

Two-part study. Part one was a pre-clinical evaluation of gene expression in a 3D skin model. Results supported the design of clinical portion. Part two was a double-blind placebo controlled design. 20 healthy females randomized to take 3g MSM per day or placebo for 16 weeks. Signiﬁcant improvements in skin appearance and condition were found in the treatment group when evaluated by expert grading, instrumental analysis, and participant self-assessment.

Double blind, placebo controlled study design. 22 healthy adults randomly assigned to take either 3g of MSM per day or placebo for 21 days before running a half marathon. MSM group saw clinically signiﬁcant reductions in both muscle and joint pain.

The Inﬂuence of Methylsulfonylmethane on Inﬂammation- Associated Cytokine Release before and following Streneous Exercise.

Double-blind, placebo controlled study. 24 healthy adult males randomly assigned to receive either treatment or placebo for 14 days. Intervention of 3 grams of MSM per day for the 14 day period resulted in signiﬁcantly lower (1.55 + 0.82 vs. 3.75 + 2.58 p=0.012) pain/discomfort 2 hours following a leg extension exercise to muscle failure when compared to the placebo group.

8 subjects were randomly assigned either 1.5 or 3.0g of MSM per day for 30 days. Leg extension exercise to exhaustion. TEAC increased in a dose-dependant manner. Fatigue and homocysteine decreased in dose dependant manner. MSM may favorably inﬂuence selected markers of exercise recovery, especially at 3g/day.

24 jumping horses divided into 3 groups; control, [email protected] 8mg/kg BW and combo of 8mg/kg MSM and Vit C 5mg/kg. Blood samples collected before and after exercise. NO, CO, Lipid Hydroperoxides, and Antioxidant enzymes, glutathione peroxidase, glutathione transferase and glutathione reductase measured. Exercise induced signiﬁcant increase in lipid peroxidation, NO, and CO. Reduced glutathione, and antioxidant enzyme activity was decreased. MSM signiﬁcantly ameliorated all of these exercise-related changes and the combo of MSM/Vit C potentiated this eﬀect with some of the parameters close to pre-exercise levels.

Actions of Taurine, Methylsulfonylmethane and Silymarin Against Acetaminophen Induced Neuro- and Hepato-Toxicity in Rat

This study evaluated the eﬀects of pretreatment (14 days) with either MSM (400mg/kg/day), taurine, or silymarin on acetamino- phen (APAP)-induced liver and brain injury in rats. MSM pretreatment resulted in signiﬁcant amelioration, over control, of APAP-induced changes in liver enzymes AST and ALT; brain and liver markers of oxidative stress - MDA, GSH, GSSG, NO, and 8-OHdG; and 2 brain monoamines - norepinephrine, and serotonin. MSM signiﬁcantly outperformed taurine and silymarin pretreatment in liver NO levels and brain 8-OHdG.

Eﬀect of Methylsulfonylmethane Pretreatment on Acetaminophen Induced Hepatotoxicity in Rats

Supplementation of MSM blunted the increase in systemic levels of inﬂammatory cytokines (IL-6 & IL-1ß) immediately after exercise. However, Ex vivo incubation of blood from various time points with LPS caused a dramatic increase in inﬂammatory cytokines after exercise only in the group treated with MSM. Also, a 2-3 fold increase in IL-10 was seen only in the MSM group after LPS stimulation despite lower IL-10 levels before exercise.

A Multi-Centered, Open Label Trial on the Safety and Eﬃcacy of Methylsulfonylmethane in the Treatment of Seasonal Allergic Rhinitis

This study used radiolabeled S(35) to evaluate the absorption and metabolism of MSM using mice. The study found that MSM is easily and readily absorbed in the small intestine, creating a pool of sulfur available to the body, relieving the bioburden on SAAs. It found that MSM sulfur in incorporated into proteins, likely though post-translational sulfation. 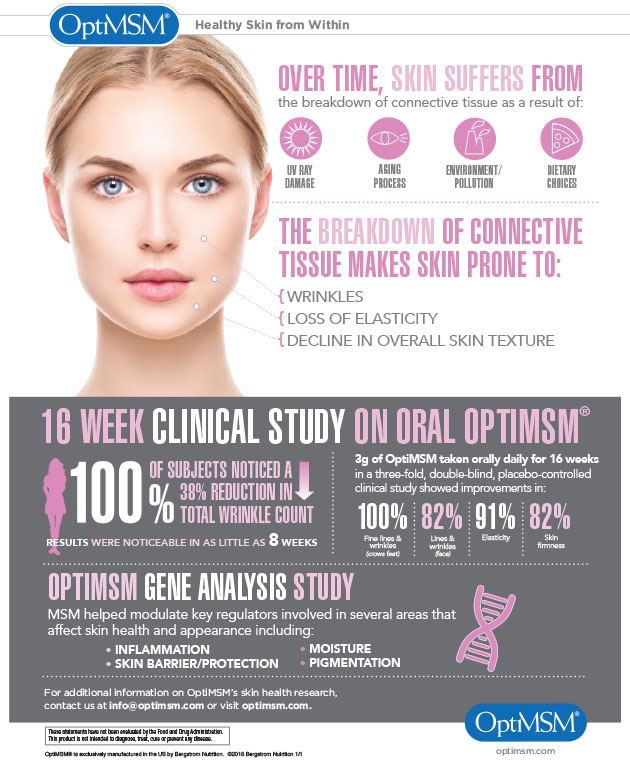 U.S. made OptiMSM® is the premium branded form of MSM that is GRAS – designated and supported by safety data and published clinical research.

Trusted by manufacturers and consumers alike, OptiMSM has earned the reputation as the purest, safest, most consistent quality MSM in the world.

i
We act as a connection between buyers and suppliers. We are NOT responsible for any transactions or claims made after contact.
In Stock
Lead Time
More from Bergstrom Nutrition