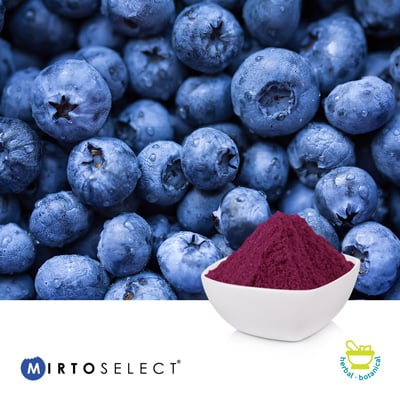 Copy the link below to share with others:
Copy to Clipboard
Visit Indena storefront
Botanical | Herbal
Phytochemicals
Superfoods
IO Connect
This is a branded ingredient. The seller has provided you with additional information such as applications, clinical research, intellectual property, and more. Click “Learn More” to view details.

Vaccinium myrtillus L. is a small edible berry whose use in traditional medicine has been documented since the Middle Ages, becoming one of the major herbal remedies after the 16th century. Later studies have then identified some of bilberry’s biologically active substances, particularly the anthocyanins, with impressive antioxidant properties.

Mirtoselect® is a standardized extract containing more than 36% of anthocyanins, whose formulation has been optimized since the 1970s.

Supported by more than 60 positive studies, including at least 30 controlled or double-blind studies about vascular and eye health efficacy, nowadays Mirtoselect® is also studied for the broad effect of its anthocyanins profile, encompassing memory optimization, cardiovascular health, metabolic health, and more.

The beneficial activity of Mirtoselect® relies mostly in its anthocyanins’ powerful antioxidant potential, although anthocyanins’ are also associated to other biological activities.

The major application areas investigated so far for Mirtoselect® are vascular health and ophthalmology. Thanks to the effect on vascular circulation, Mirtoselect® can improve oxygen and blood delivery to the eye, restoring the tear secretion functionality and supporting eye health in retinal challenges. 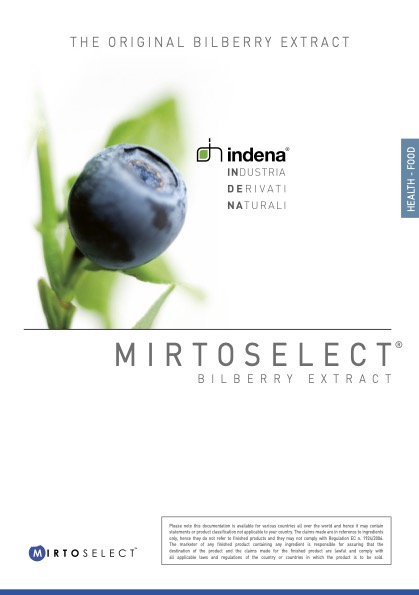 From Bilberry to Mirtoselect® Background: Diabetic retinopathy is a common complication of diabetes mellitus (DM) that affects the microcirculation of the eye. DM patients with or without signs of retinopathy showed a significant reduction in amplitude and latency of their retino-cortical bioelectrical activity assessed by the visual evoked Potential (veP) test. Here, we aim at investigating the effects of an oral supplementation of standardized bilberry extract (Mirtoselect®) on VEP parameters of DM patients.

Methods: nine patients affected by type 2, non-insulin DM associated with severe pre proliferative retinopathy were enrolled in this preliminary, supplement study. a pattern-reversal veP analysis was performed at baseline and after 1-month oral supplementation with 320 mg/day of bilberry extract standardized to 36% anthocyanins (Mirtoselect®).

Results: P100 amplitude and waveform in 4 patients (44.4% of all patients) improved following 1-month oral supplementation. in these subgroups of patients we observed an overall normalization of the veP response to visual stimuli. cOnclUSiOnS: Dietary supplementation with standardized bilberry extract (Mirtoselect®) represents an alternative strategy to support eye health and control or prevent the worsening of retinopathy symptoms in DM patients.

Bilberry Extracts are Not Created Equal: The Role of Non Anthocyanin Fraction. Discovering the “Dark Side of the Force” in a Preliminary Study

Objective: Several experimental studies and clinical trials support the potential of bilberry (Vaccinium myrtillus L) extracts in pro- moting eye health and circulation. Many active ingredients have been isolated from the berries and leaves of the bilberry plant. However, antho- cyanins represent the most widely studied bio- active compounds in this plant.

Conclusions: Our registry study suggests that Mirtoselect® supplementation could repre- sent an effective and safe integrated approach for the treatment of different retinopathies.

Objective: Dry eye, a chronic disease of lachrymal fluid and corneo-conjunctival epithelium, could significantly impact visual function, affects quality of life and work productivity. Beside several conventional treatments, nutritional supplements based on bilberry extract have been identified as effective contributors to eye health. Here, we aim at investigating the bioavailability of a standardized bilberry extract, its ability to alleviate dry eye symptoms and its antioxidant potential.

The market for botanical products is full of adulterated items and being able to guarantee the quality and safety of your own products provides a competitive edge. Indena ensures the reliability and consistency of its extracts' composition with a process that involves every stage of production from cultivation to the finished ingredient.

The first quality control step during the preparation of botanicals is to correctly identify the plants being used. Currently, there are 2 mandatory tests: botanical identification (macroscopic and microscopic) and chemical identification (analytical “fingerprint” techniques to characterize secondary metabolites). The 2 main reference points are the European Pharmacopoeia’s general monograph, “Herbal,” and the United States Pharmacopeia’s general chapter on the “Identification of Article of Botanicals Origin,” which are accepted all around the world as key guidances.

Most plants can be unequivocally identified by macroscopic and microscopic analysis. In some cases, however, it is necessary to resort to DNA-based methodologies to precisely define the identity at the species or variety level. As such, it can be said that one of the most effective methods is to verify the authenticity of botanical raw materials according to its genomic identification.

Vaccinium myrtillus L. is a small edible berry whose use in traditional medicine has been documented since the Middle Ages, becoming one of the major herbal remedies after16th century. Later studies have then identified some of bilberry biologically active substances, particularly the anthocyanins, with impressive antioxidant properties.

Mirtoselect® is a standardized extract containing more than 36% of anthocyanins, whose formulation has been optimized from the 1970s.